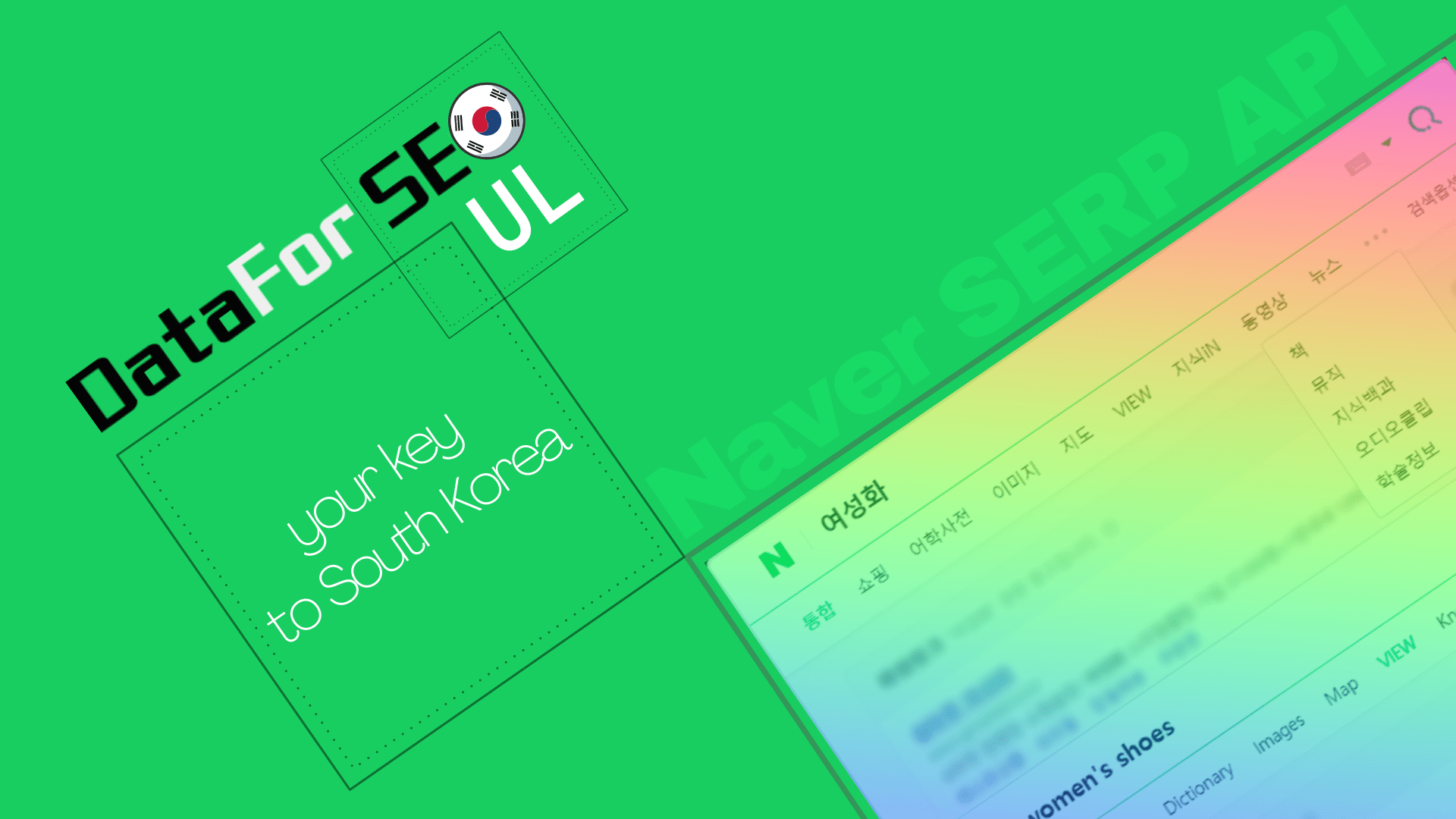 The South Korean market is a powerful opportunity for amplifying your SEO business. Here’s a quick country profile:

However, before taking your SEO business to this promising market, there’s one more extremely important fact you need to know about South Korea. A Google-focused strategy will significantly limit your opportunities for potential audience reach here.

Throughout this article, we’ll help you to find all the answers and connect all the dots. Here’s what we’ll cover:

1What’s Naver and why it’s the Google of South Korea?

3A quick guide to Naver SEO and SEM

On top of that, to help you connect with your potential customers in APAC, we’ve recently added Naver SERP API. In the last part, we’ll show you how to enhance your SEO tool with it efficiently and budget-friendly.

What’s Naver and why it’s the Google of South Korea?

Naver (derived from “navigate”) is a South Korean online platform and search engine, launched by NAVER corporation in 1999. The search engine and the web platform only work in Korean, but you can still run a search in any language, and get relevant information from Naver.

According to the latest data for 2020, Naver’s share of monthly active users in South Korea is 59% versus 32.7% of Google’s. Yet, you may see that the stats vary. To bring some clarity into the matter, The Egg Company, one of Asia’s top digital marketing agencies, studied the discrepancies between numbers. They found that the majority of sources report Naver’s dominance over Google with the former holding from above 60% to 70% of the country’s search market share.

The Egg also conducted a study of search volumes on Naver and Google.co.kr, and the results support the persistence of Naver dominance in South Korea. 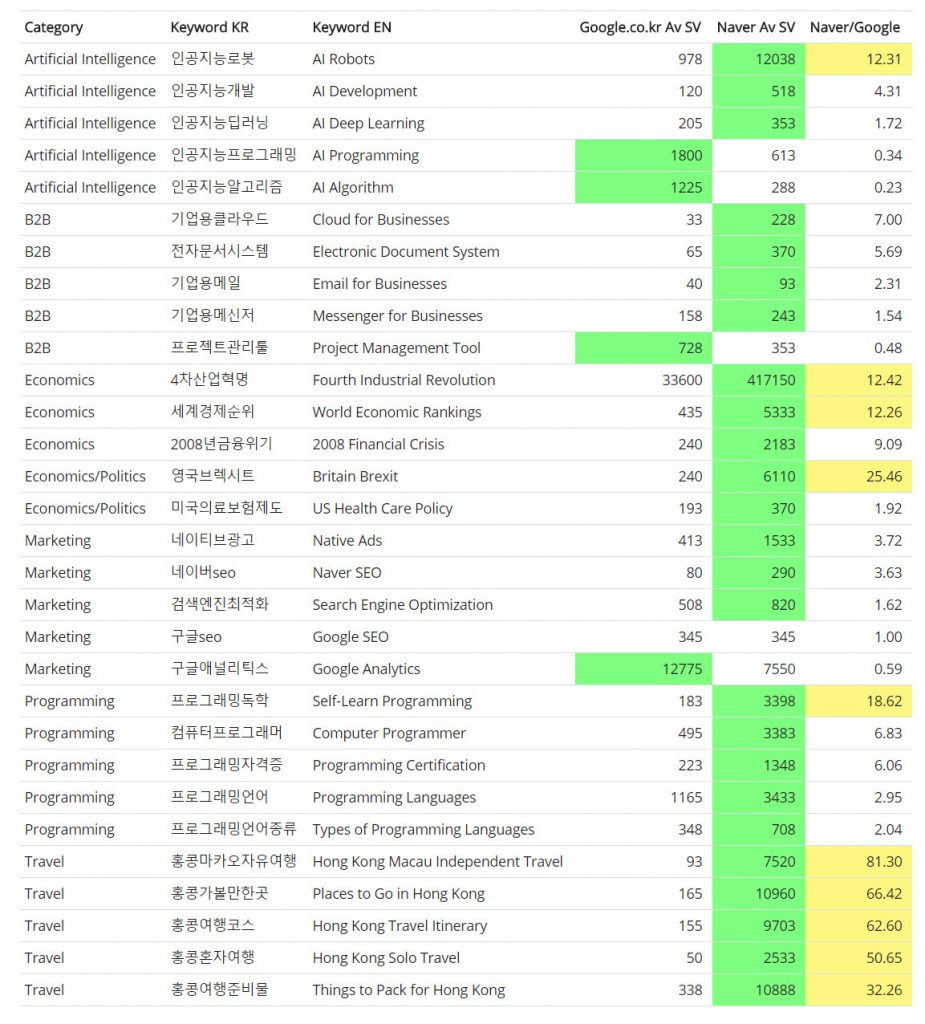 The thing is, Naver was developed specifically around the Korean language, which explains its ability to frequently beat Google at delivering more relevant results. Besides that, many Korean websites ban not only Google but also other global search engines from indexing their content.

Let’s start with taking a look at Naver’s homepage. It’s strikingly different from Google’s, yet quite similar to Yahoo. The key distinction from the latter is the abundance of ads on Naver. 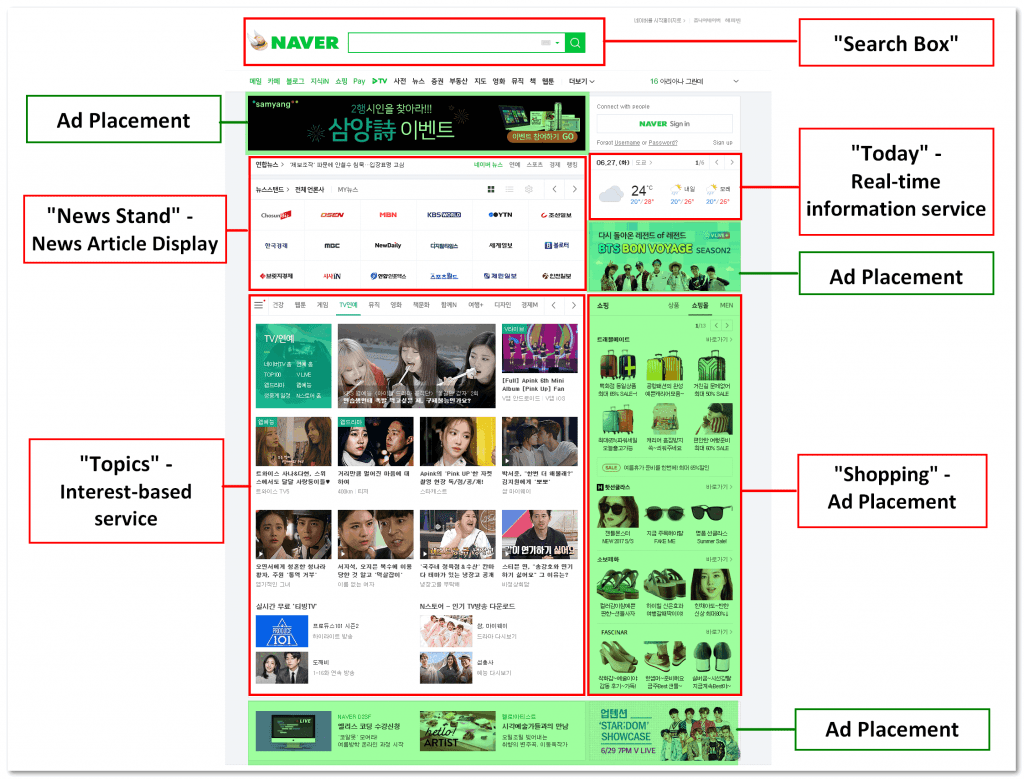 Things don’t change much when you run a search. You’ll see paid results all over the SERP. But before diving into the search results, let’s explore what’s above them – Naver search categories. They are very similar to Google’s ones, and likewise, the order in which they appear changes depending on the search query. Here’s what you can see vs what you could see in English. 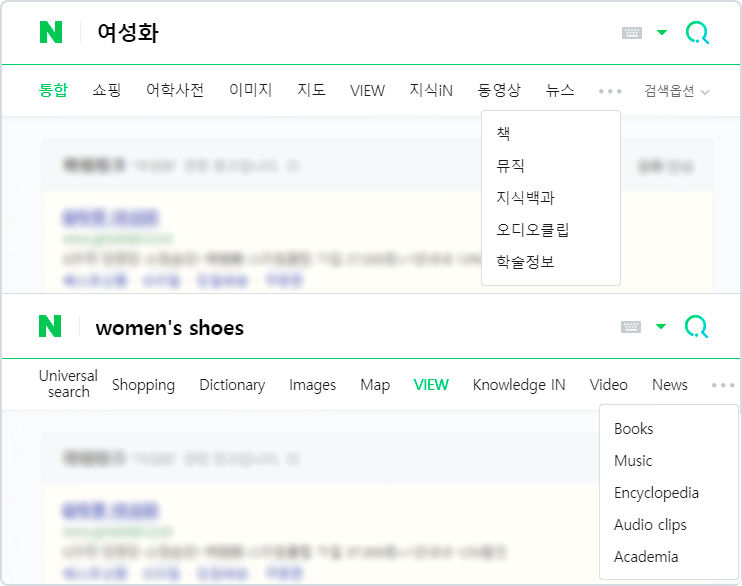 Results from these services used to be scattered across the SERP, but with the October 2020 update, Naver consolidated them into one category.

Still, for some searches, they may appear separately.

Also, before the update, results for mobile and desktop for the same query used to be different. Now the SERPs for the same keyword match across the devices. The only difference is, of course, the screen size occupied by each result.

As for Naver SERP features, they look pretty similar to what we are used to seeing on Google. Yet, the major difference is that Naver has a very clear bias to regular organic listings. If Google shows 10 organic results even when the whole page above the fold is occupied by SERP features, Naver generally displays only 3-4 organic results, while all the rest are ads and sections featuring Naver properties.

After realizing that Naver shows so few organic results and so far-off, it’s easy to think that SEO in South Korea does not exist. In reality, it is challenging, but it’s just that SEOs have to play by different rules.

A quick guide to Naver SEO and SEM

As we’ve already mentioned, South Koreans are avid bloggers and blog readers. Naver, developed by South Koreans for South Koreans, is well aware of that and is harnessing the power of user-generated content, featuring more blogs, posts, and Q&A results.

Of course, Naver’s bias to content from regular websites and blogs stays, as it tends to feature its own platforms above everything else. Anyway, it consistently features more user-generated content, and that’s what Naver SEO is all about.

The main idea of using Naver to your advantage is creating content, growing engagement, and doing SEO not only for the company website but also for Naver Blog, Naver Posts, Cafes, and Knowledge IN. These properties are ranking better, and that’s where the South Korean audience actually likes to hang around more.

The content-focused tendency is evident even when you look into the Naver ranking algorithm, which is much more concealed than Google’s. Based on what’s known from the official Naver search blog, there are two algorithms applied to different Naver services and types of results.

C-Rank is the “creator rank”, and it aims at determining the authority of the creator (author of a post, discussion, or answer) and favors accounts that publish more regularly.

Worth pointing out, Naver’s P-Rank counts in and even favors backlinks from Naver properties, fueling the zeal to be active on Naver Blog, Cafe and Q&A. Naturally, it makes the best recipe to approach South Korea’s leading search engine:

As for Naver Ads, anyone who wants to advertise on the platform needs to provide an official business license to create an Ads account in the first place. Many foreign companies targeting the South Korean market rely more on advertising rather than organic search appearance. The problem here is that Naver’s Search Advertising interface is available in Korean only, so a company willing to run ads has to either hire a Korean-speaking expert or a Korean digital agency.

How to enhance your SEO tool with DataForSEO Naver SERP API

Here at DataForSEO, we are aiming to amplify your possibilities for conquering new search markets. We provide a full stack of affordable APIs for getting SERP data from various search engines.

To help you connect more deeply with customers in APAC, we’ve recently added Naver SERP API. It can streamline the development of tools for monitoring organic and paid positions in South Korea’s main search engine, making the process faster, easier and keeping it under budget. Even though it’s a small step for us, we know that Naver SERP API can become a big leap for some of you.

As of now, this API can provide you with organic and paid listings, as well as related searches, images, video, local pack, and map results from search.naver.com. However, you can additionally define a device and operating system to get a more precise SERP overview.

Besides that, you’ll get two perspectives on SERP rankings for each result – rank within a group of identical results (organic or paid) or identical SERP features, and absolute rank within all SERP elements. Results from Naver VIEW will be included as organic listings, but you will easily distinguish them by the “domain” field, which will indicate “blog.naver.com” or “post.naver.com” etc.

If you need to obtain separate SERPs from other Naver’s properties, such as blog.naver.com, kin.naver.com, or cafe.naver.com., or would like us to include more Naver SERP features, don’t hesitate to contact us. Once you request the necessary service, we’ll add it within the shortest time possible.

South Korea offers ample opportunities for scaling an SEO business. While many companies approach the global search market with a Google-oriented strategy, the South Korean search landscape is left underserved. The thing is, the country has slipped out of Google’s grip, and its leading search engine is Naver. Sure enough, if you want to take your business to the splendid potential of the APAC region, you need to get armed with data and insights unique to Naver.

Here at DataForSEO, we know that conquering new search markets can be challenging, and we’re striving to help you tackle any challenges associated with data collection. To streamline your opportunities in South Korea, we’ve recently added Naver SERP API.

You can already start expanding the capabilities of your SEO software. In just a few days of Naver SERP API integration, you will be able to open up your rank tracking solution for the South Korean market.

The three passions of my life are writing, learning languages, and traveling. I followed the calling throughout the four years of BA in English and French, and carried my dreams in a backpack across 13 countries. Being a Content Writer at DataForSEO, I see every article as a journey to new destinations of the tech and SEO world. Embark on. 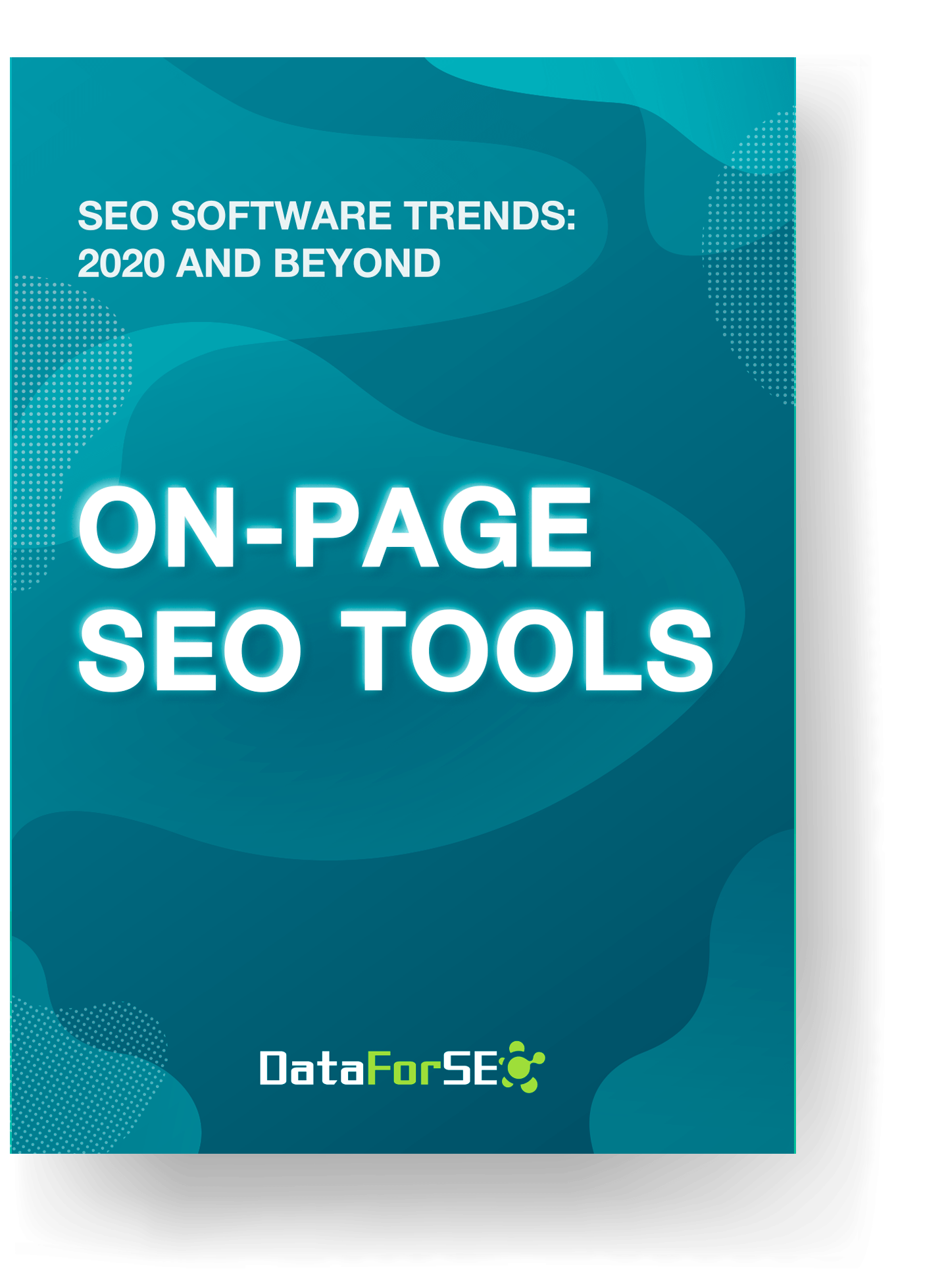